thatDot Real-time Novelty Detector for Categorical Data is a general purpose application, deployable in public or private data centers, to find anomalies and insights in streaming or batch data, at scale, in real-time. 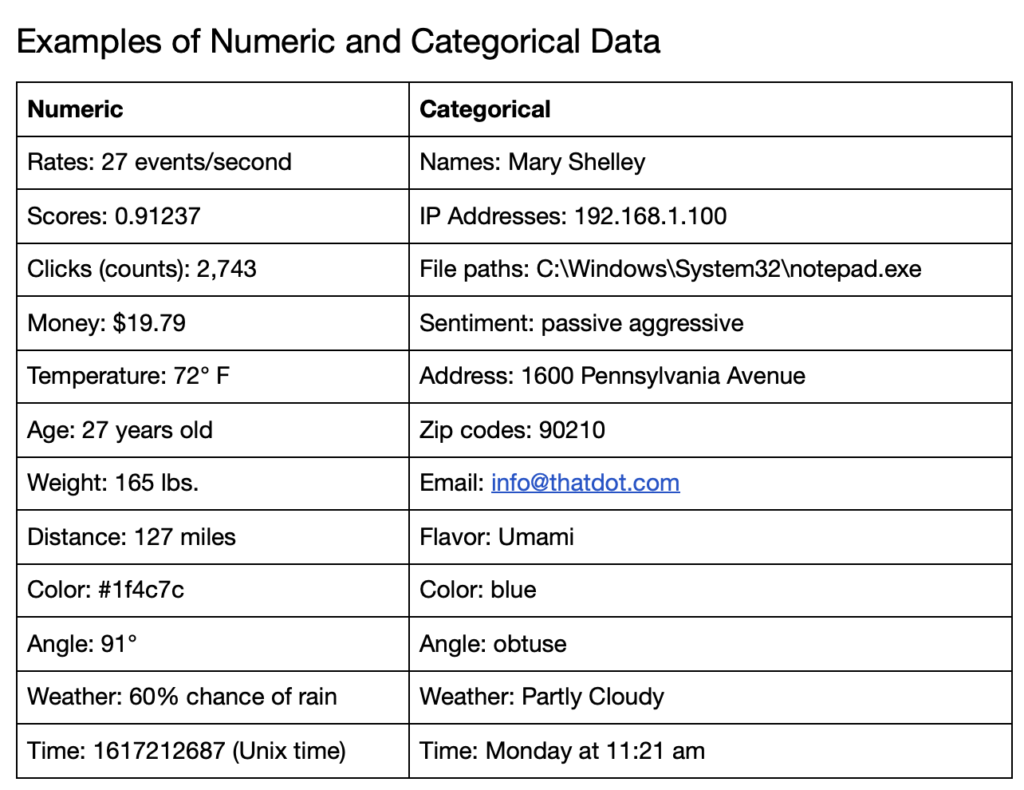 Ingest data as individual or bulk observations, as files, or steams from platforms such as Kafka or Kinesis. Bulk score responses are returned in a single payload, the responses in the same order as the submitted data. 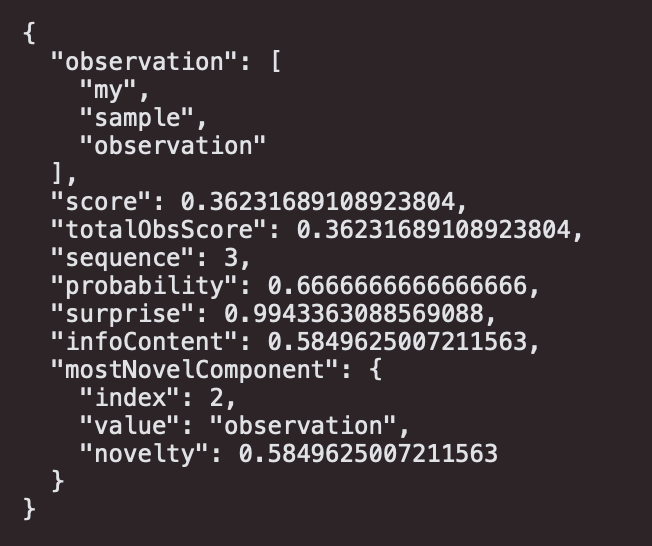 Data ingestion rates are automatically managed to ensure system operation during volume spikes. Use of Kafka or Kinesis stream queuing is recommended to buffer event streams. 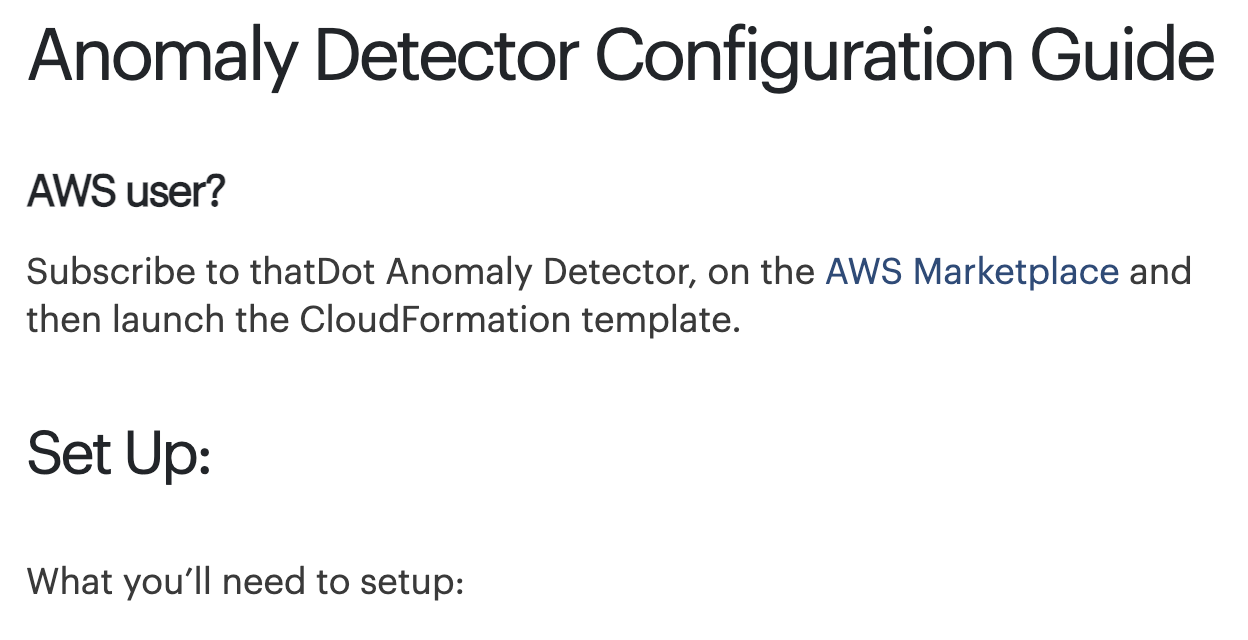 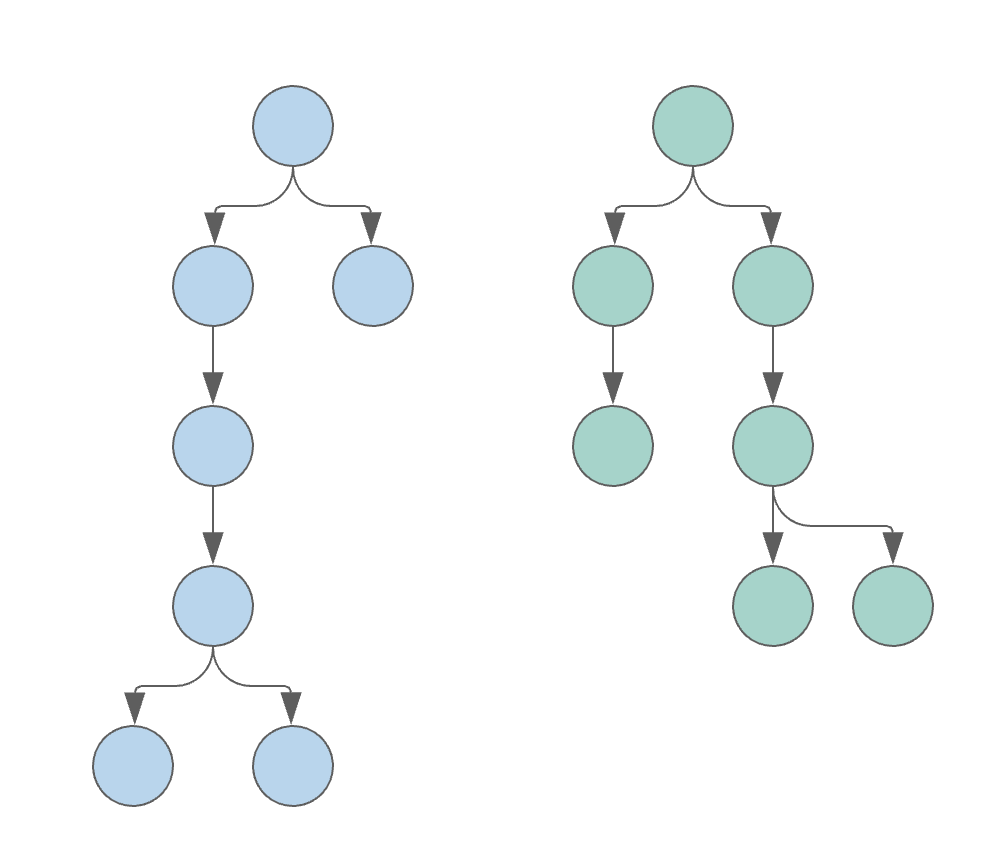 thatDot incorporates all data observations to learn a map of behavior from the data, providing a deep understanding of how systems, files, and/or users interact. This behavioral fingerprint of the data enables a nuanced determination of what is anomalous in the data while also providing “why” an observation is seen as novel or not. 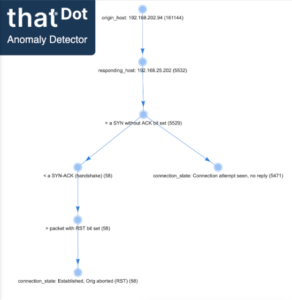 No pre-training using labeled data is used as the system dynamically learns from the data as it is observed, and new data values are automatically incorporated on the fly.

New Is Not Always Novel

Incorporating both metrics and categorical data, thatDot Anomaly Detector uses the structure created from all observations for a deep understanding of data context. Having a  rich context allows the system to determine whether the observation is anomalous vs unique. Sometimes unique data values are normal behavior and knowing this allows Anomaly Detector to differentiate between anomalies and unique data values, eliminating false-positives.

Every Result Includes An Explanation

Anomaly Detector is not a “black box” solution. Define your custom use of Anomaly Detector to leverage your expert understanding of your data to  answer questions. What data you use and how it is ordered dictates any bias you wish to introduce and the insights produced. 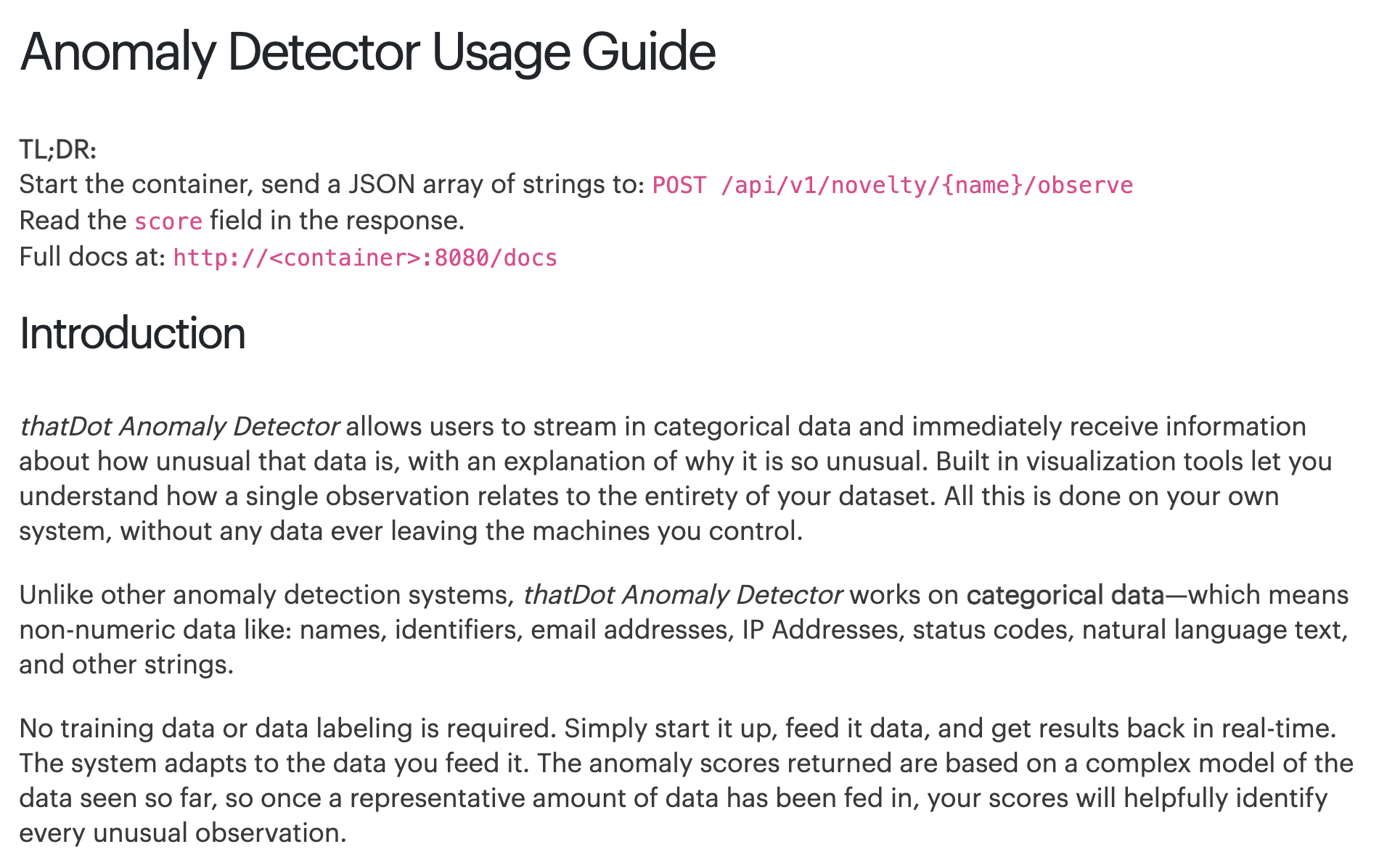 Anomaly Detector offers three API-driven modes of model management to limit or remove the influence of highly novel observations. Users may: 1. remove individual or groups of observations, 2. define a rolling window of observations, or 3. delete entire contexts from the system. 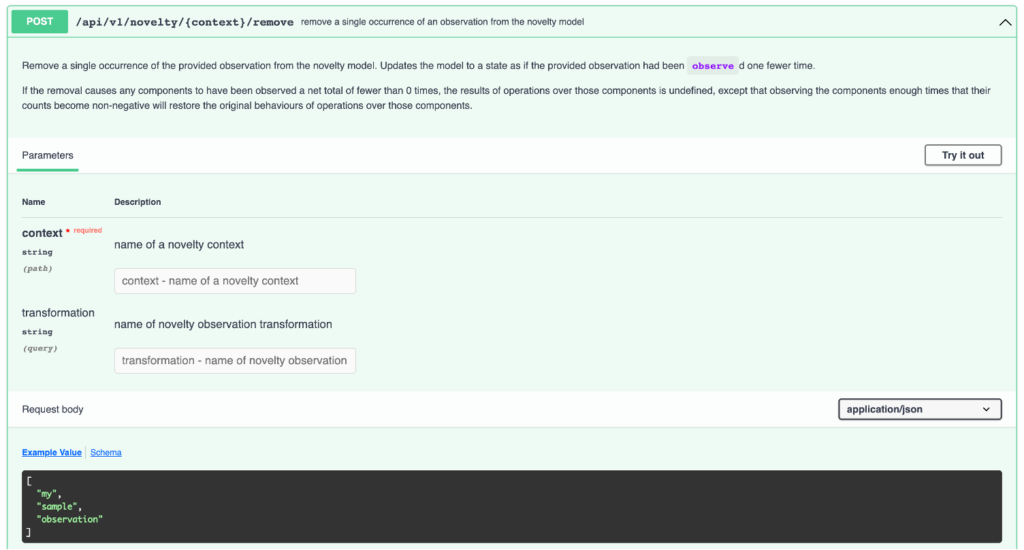 An API response is generated for each observation submitted to the API. The response includes the submitted observation data and a series of scores generated by Anomaly Detector. For more complete details see the usage guide, under the heading “Step 3: Interpret the Results” 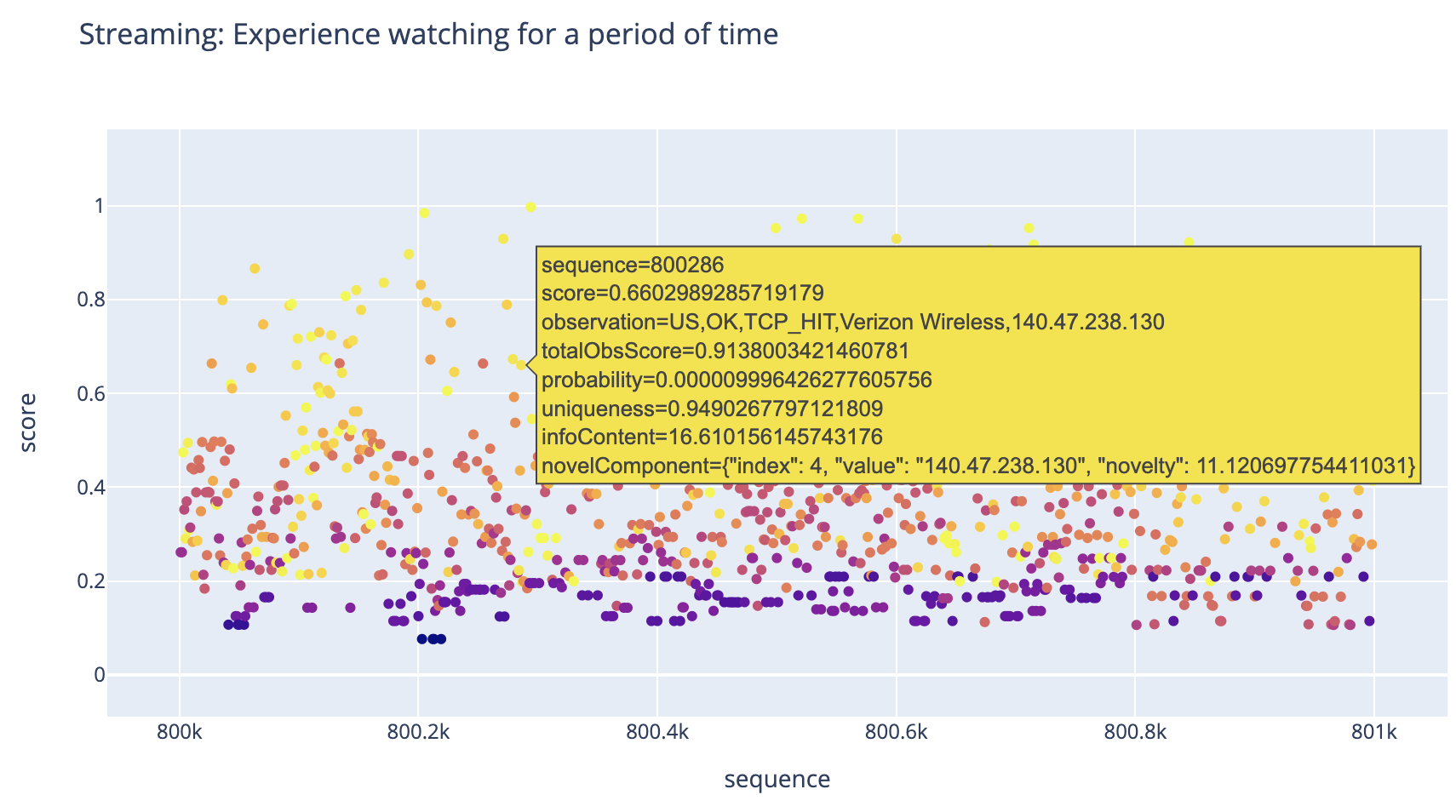 The score is the total calculation of how novel the particular observation is. The value is always between 0 and 1, where zero is entirely normal and not-anomalous, and one is highly novel and clearly anomalous. The score is the result of a complex analysis of the observation and other contextual data. In contrast to the next field, this score is weighted primarily by the novelty of individual components of the observation. Depending on the dataset and corresponding observation structure (see Step 2), real-world datasets will often see this score weighted with exponentially fewer results at higher scores. Practically, this often means that 0.99 is a reasonable threshold for finding only the most anomalous results; and 0.999 is likely to return half as many results. But to reiterate, the actual values and results will depend on the data and observation structure.

Which component in the list from the observation field was the most novel. This value is the index into that list, and is zero-indexed.

This field represents the probability of seeing this entire observation (exactly) given all previous data when the observation was made.
GO TO TOP

Runs In The Cloud

Novelty Detector is available as a .jar or container. If you subscribe through the AWS Marketplace you can instantiate in minutes using the Cloudformation template. See the Quick Start page for details.

Deploy on-premise or in your cloud VPC, the Anomaly Detector application is available as a .jar or container. On-premise deployment ensures the privacy of your data and has none of the security exposures associated with SaaS service use.

Every instance includes interactive documentation at port :8080/docs. Interactive docs let you view sample code for the use of that method and provides the ability to submit sample calls to see actual response payloads. 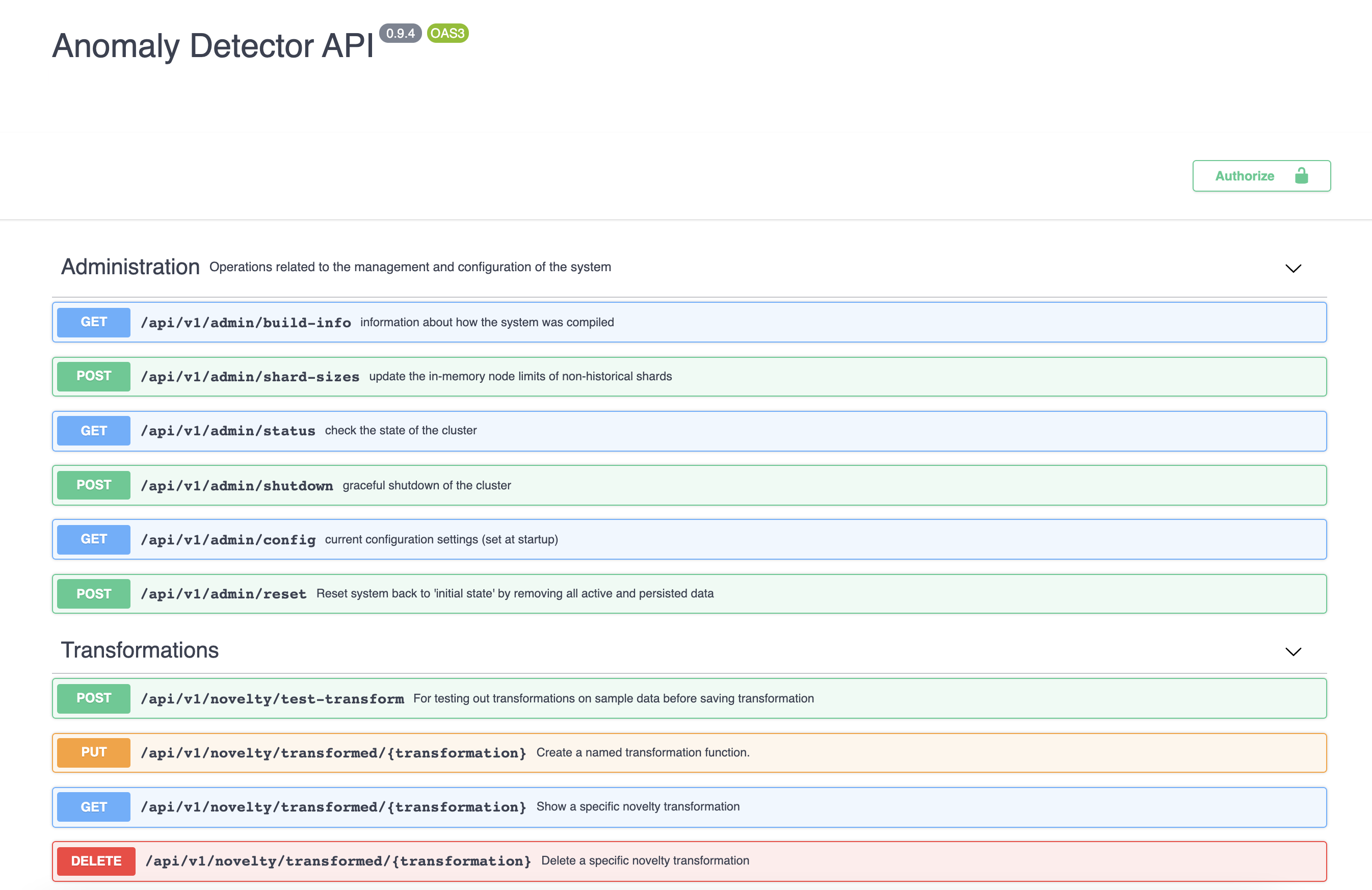 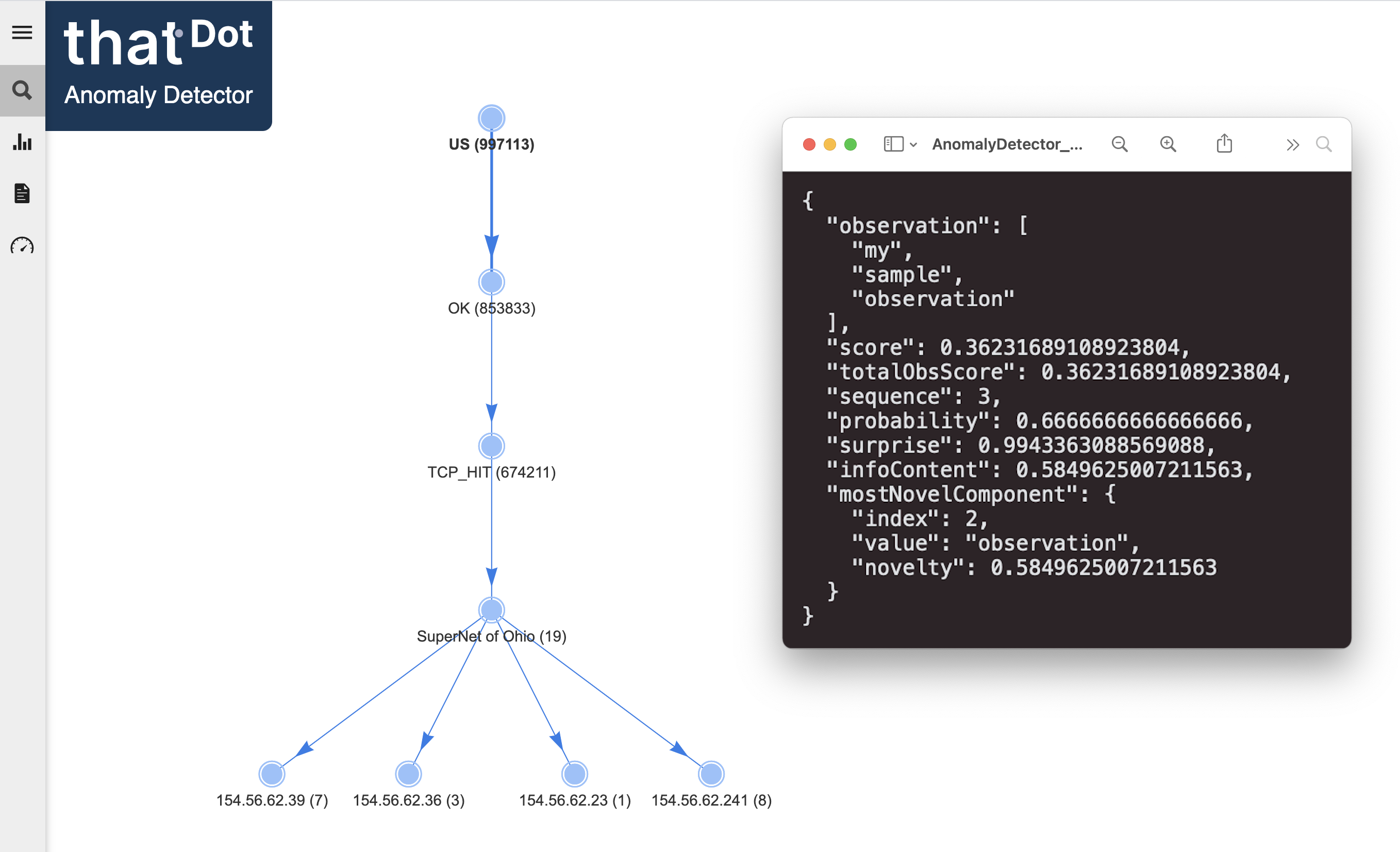